For Christmas, Santa Claus might bring the presents but Mariah Carey brings the spirit. Waiting for the former to show up with presents is routine. Carey, on the other hand, sure knows how to keep a crowd – in this case, the press – in suspense.

Also Read | Get ‘First Day First Show’, our weekly newsletter from the world of cinema, in your inbox. You can subscribe for free here

Four and a half hours later, Carey finally appears on the screen, draped in red velvet, her blown-out hair lifts occasionally owing to a nearby fan (not for a cooldown but for effect, I suspect) and she lounges on a couch in front of a cosy fireplace. The mantle has stockings lined up and, of course, a behemoth Christmas tree that sparkles, but not as much as Carey herself who is draped in diamonds.

Christmas means the world to Carey and her fans; when December hits, you are sure to hear her record-breaking, chart-topper ‘All I Want For Christmas Is You’ (her first-ever Christmas song, which she wrote at 18) booming through the speakers at the grocery store, the mall and the radio. And there is a reason the festive season is so special to Carey.

“The memories of my childhood Christmases are kind of bittersweet because I had such a dysfunctional, brutal family. It was not always fun but I always hoped it would be – and I remained an optimist about it,” she explains, “My mother got me into understanding Christmas, making mulled wine and singing carols with her friends. Though I lived in a very small and humble place, that made that time of the year special for me. So now, I’m in charge of the holiday-planning, I do whatever I can to make it special for my kids [twins Moroccan and Monroe] and, selfishly, for me. I take a few moments and quietly enjoy feeling the spirit.”

Working with Khalid and Kirk Franklin

Though the musician is best known for ‘All I Want For Christmas Is You’, she points out that she has written many more festive songs over the years. Ahead of Mariah’s Christmas: The Magic Continues on Apple TV+ (December 3), Carey talks about her new single ‘Fall In Love’ which features Khalid. “It’s a spiritual moment,” she describes. “It’s almost like nostalgia; when I was writing the lyrics, I was thinking that maybe it’s about a couple that knows they need to fall in love again at Christmas time. Kirk put his beautiful choir on top of it and we ‘re-jujjed’ it. This is one of my favourite Christmas songs I’ve ever written and it’s so different from anything else I’ve done.” 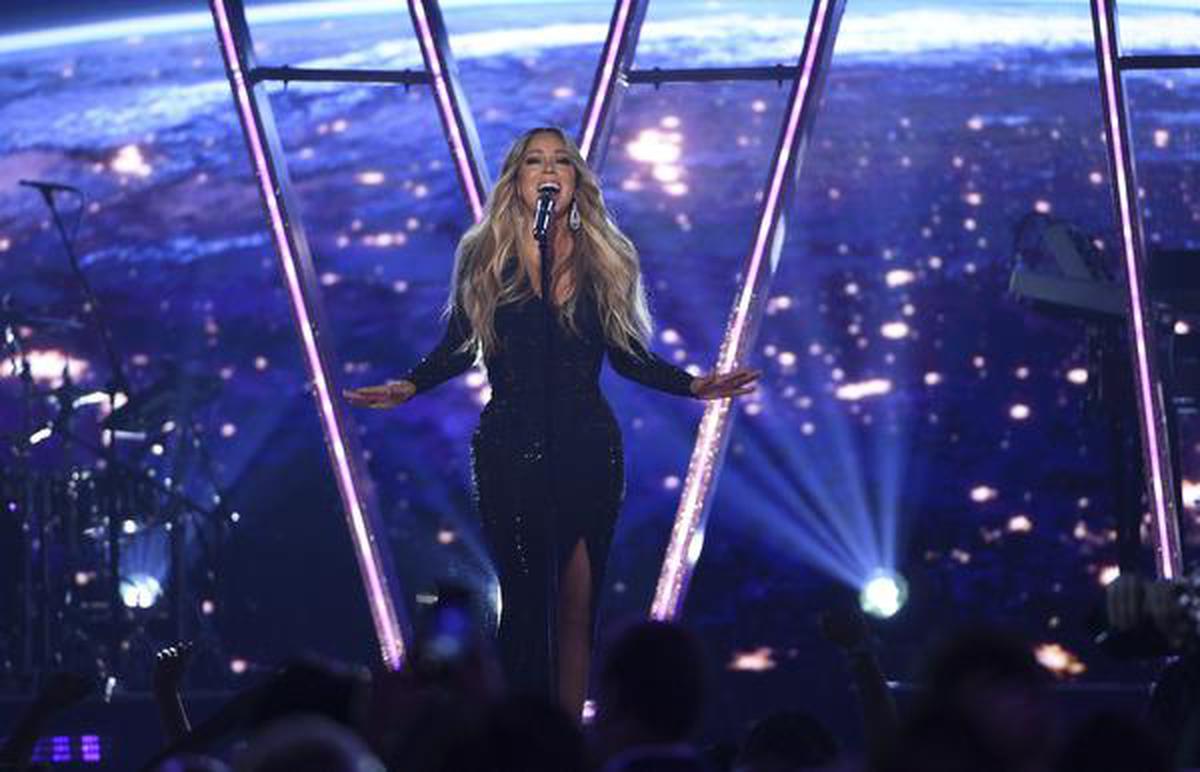 Having heard his hit single ‘Location’, Carey reached out to Khalid for a collaboration which culminated in her new song ‘Fall in Love at Christmas’. A fan of Khalid, she reminisces on their collaboration. “Khalid had been working on his brand new album and he secretly sent me some of the music, and I was living for it! We had our own side-bar conversations.” She adds, “Kirk is such a legend in the gospel world but still so young and vibrant, so when we got together we filmed ‘Fall in Love at Christmas’ before Halloween, it was so much fun.”

Though there are elements of festive grandeur in both her Apple TV+ Christmas specials Mariah Carey’s Magical Christmas Special and Mariah’s Christmas: The Magic Continues, Carey says she misses the fervour around performing live. But she is happy to be patient until the world is safer.

“I wasn’t trying to go out there and encourage people to gather while we still don’t really know what the situation is; that’s too big a responsibility for me. I’m very thankful for the time in the studio, recording and re-recording and also re-inventing songs. Nothing can compare to singing with your fans who are right there with you, but I think being able to speak with my fans virtually, letting them hear new songs and watch the Christmas specials are all me giving of myself to my fans… that’s the best I can do,” she sums up simply.

All about the magic

This year’s special will be different, she promises, explaining, “Through the years, there’s been a consistent thing where I would perform. We had already planned on doing a special with Apple TV+, but they stuck with it even though last year with Mariah Carey’s Magical Christmas Special was very difficult. In regards to this year’s special Mariah’s Christmas: The Magic Continues, there was something very special about the way Joseph Kahn approached filming this; I love his vision because he makes me laugh when he describes it, saying I’m ‘always a big diva’ and I live for that [laughs]; we did not go for a toned-down version.”

From page to screen

Carey adds that this special has more energy to it, with her kids being present and radio legend Zane Lowe interviewing her. “I also did ‘Christmas (Baby Please Come Home) which has always been a fan-favourite and is now one of mine because my band and I at the Butterfly Lounge came up with a little different jujj,” she describes.

In The Magic Continues, a 1940s art-deco world is built around a glitzier Christmas, and naturally, the fashion must match; Carey dons a custom Dolce & Gabbana gown. “Dolce & Gabbana made a beautiful bejewelled gold dress. The jewels all over the dress were quite big and a long train; the whole dress weighed around 60 pounds (around 27 kilograms) so I had to carry that dress [laughs] but it was made so perfectly for me that I thought ‘we have to do this’. I dare anyone to just walk in it!”

A lover of tradition

Though The Magic Continues is a less-obvious Christmas special, it does not mean Carey is not a sucker for snow, presents and traditions. “Half the time, my kids want to be on video games because that’s just the reality of today but I have so much fun because it’s the only time I fully relax. I tell my people, ‘I don’t care what time of night it may be, if the first snow comes in, wake me up!’ because I have to see that beautiful flurry.”

Carey also considers herself something of a Santa Claus, sharing that the most lavish present she has ever given someone has been a Ferrari, cheekily adding, “Did they deserve it? I don’t know!” She jokingly points out that in the near-impossible event of her retiring as the ‘Queen of Christmas’ (an unofficial title given to her by fans over the years) she would move to the North Pole.

‘Mariah’s Christmas: The Magic Continues’ will stream on Apple TV+ from December 3, 2021.

A journal that went around Bengaluru during the pandemic, documenting thoughts on gender

Watch | A chat with the cast of The Wheel of Time

Bichu Thirumala obit | Prolific and poetic, a Malayalam lyricist for all tunes

Why Sonu Nigam is embracing NFTs